a play by Johnny Meyer

Request a Copy of the Play

A quote from the play

CRYPTOMNESIA was commissioned by  Timothy X. Troy and the Theatre Arts Department at Lawrence University, with support from the J.Thomas and Julie Esch Hurvis Professorship. It debuted in May 2014 as a complement to Antonin Artaud's JET OF BLOOD, Samuel Beckett's WHAT WHERE, and Caryl Churchill's THIS IS A CHAIR.

CRYPTOMNESIA was first directed by Kathy Privatt, and the 'B SRD SHRTS program was directed by Kaythy Privatt and Timothy X. Troy. All performances took place in the 445 seat Stansbury Theatre, located at 420 E College Avenue, Appleton, WI 54911.

CRYPTOMNESIA was first performed with the following cast:

PRODUCTION REQUIREMENTS
The cast requires nine actors and a bed, a board, and a socket. A camera and a projector are also necessary.

SPECIAL THANKS
...to the Great Plains Theatre Conference, where I met Professor Timothy X. Troy and the artist Mac Wellman. Special thanks to my friends in Austin who helped develop the play: Karen Alvarado, Megan Rabuse, and Chris Fox. 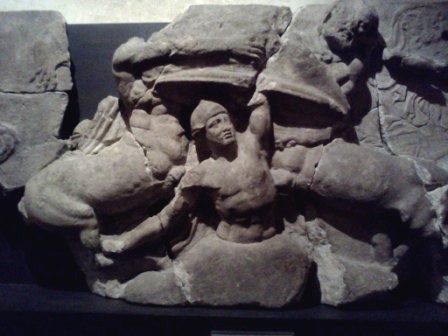 Caeneus against the Centaurs. A part of the Parthenon frieze, exhibited in London. Sculpted between 443 and 438 BC.

My name is C. Stephenson--I met you briefly during one of your visits to Lawrence. Anyway, I am the dramaturg for the B'srd Shrts and I am currently compiling playwright bio's for the program, and we thought it would be kind of snarky to do an interview format for your bio, since you are alive.

If that is okay with you, I was wondering if an e-mail format for the interview would be okay, as I'm not sure I could set up a phone interview quickly enough.

If so, let me know and I'll e-mail you back a document with the questions that you can fill in. Also please feel free to add anything pertaining to yourself as a playwright or simply as a person that you would like to be included. I have a small bio from Kathy and Tim I've looked at so hopefully I'll be able to cover a good amount.

Why don't you fire away, and we'll see how it goes?

Q: Okay, I have to ask the typical protocol bio question of: Where were you born, when were you born, where did you grow up and does that or your family have any influence on your writing/authorship?
Q: Favorite playwright? Favorite absurdist playwright?
Q: What style is your typical go to style for playwrighting, or do you take the Churchill/Beckett “can’t categorize me” approach?
Q: Thanks for serving in the military— I have the utmost respect for you, I come from a long line of servicemen. How much does that influence or seep into your dialogue/themes? I can’t imagine a life experience at that caliber not finding its way into your art in some way. I am a new mom and I find even when I try not too, essences of that find their way into my scripts.
Q: What’s your biggest pet peeve in life or as an artist?
Q: Would you rather go to lunch with Samuel Beckett or Artaud? Care to explain? I think each would provide polarizing opposite effects.
Q: Can you give a little overview of your process and approach to Cryptomnesia, or would that be a disservice to the show itself? Was there an object, idea, movement, etc. that influenced the creation?
Q: Do you have a hidden talent?
Q: If you could trade places with any person in history, dead or alive, who would it be? Such a lame question, but I think it says a lot.
Q: Anything else you’d like to share?

Thanks for bearing with my horribly cliché questions, I didn't have adequate time to prepare a nice thoroughly thought out interview. I'll conduct a better one if you're around during production--keep it in the dramaturgy notebook.

I was born in Dallas, Texas in 1982. I grew up in Dallas, New Orleans, and Kansas City. I am sure that my childhood shapes my plays. I am the oldest child in a family with three sons and three daughters. My parents are Roman Catholic, or at least what passes for Roman Catholicism in the United States. Social context and family play decisive roles in shaping who we are, but writing is more specific than living because with writing we can edit, revise, and manufacture our wares. A short play like Cryptomnesia can only share the smallest fraction of common ground with its playwright.

My favorite playwright, the playwright I spend the most time with, is Shakespeare. The tag 'absurdist' is more useful for audience members and critics than it is for the playwright or other artists; it helps audience members approach a piece with a certain wariness, and perhaps an openness to incredulity. One of my other favorite playwrights is Christopher Marlowe, Shakespeare's contemporary and stylistic predecessor; I suppose I adopt an 'absurdist' framework when watching his plays, which I usually enjoy. Of the twentieth century playwrights, the works of Samuel Beckett remain the most accessible thanks to the 'Beckett on Film' series. But if I have a preference for Beckett over, say, Churchill or Albee, that probably has more to do with convenience and accessibility than it does with aesthetics.

Q: What style is your typical go to style for playwrighting, or do you take the Churchill/Beckett “can’t categorize me” approach?

Do they say that? Or, from a creative place, do they simply find 'style' unhelpful? If Churchill labeled herself 'absurdist,' she might not have written plays like Top Girls or Serious Money.

Q: Thanks for serving in the military— I have the utmost respect for you, I come from a long line of servicemen. How much does that influence or seep into your dialogue/themes? I can’t imagine a life experience at that caliber not finding its way into your art in some way. I am a new mom and I find even when I try not to, essences of that find their way into my scripts.

What I saw and did in Iraq and Afghanistan alienated me from America. I mourn the disconnect between what we are, and what we could have been. I am very lucky, in that I have travelled through most of America, and much of the world, and have had the chance to respond to it.

But when it comes to absurdism, I think it is more helpful to ask audience members, 'How do your own personal experiences shape your reaction what you are watching, listening, and feeling?' The playwright must be a little hands off; what we're making in Cryptomnesia is aesthetically closer to a mirror than to autobiography. It's not a landscape, or a character sketch, or a history.

The fact that human beings are capable of observing absurdist theater and responding to it intelligently is almost a miracle. But however they respond to it, that response probably has more to do with who they are and where they are from than anything else. The artists and the playwright anticipate the audience, but cannot lead them with a hook or tether.

Q: What’s your biggest pet peeve in life or as an artist?

I probably have a lot of pet peeves, and it is hard to choose! Distracted acting. Waiting for laughs. Carelessness with handguns. The incessant meowing of cats.

Q: Would you rather go to lunch with Samuel Beckett or Artaud? Care to explain? I think each would provide polarizing opposite effects.

Artaud has been dead much longer, and I think his advanced decomposition would be least likely to spoil my lunch.

Q: Can you give a little overview of your process and approach to Cryptomnesia, or would that be a disservice to the show itself? Was there an object, idea, movement, etc. that influenced the creation?

When Tim commissioned the play, he asked me to think about what 'absurdism' might mean to students at Lawrence University. Last fall, I had the chance to survey the campus, sit in on classes, and meet the students. I also explored the university's past, and tried to understand what it looked like to the people in the present.

And, truth be told, I found I really liked Lawrence University. I had never been to a liberal arts college. I enjoyed the experience, and enjoyed observing what appeared to be the experience of the students and the professors. If absurdism involves some kind of confrontation with society--and I think it does--then my liking Lawrence presented a weird sort of dramaturgical problem. It took some work to get around that.

Given the absence of obvious targets, I took a look at the individual 'person' who happens to be at Lawrence, and what they look like in the wider, less comforting society. Eventually I wound up with an observation, and two questions: As strong the local society might be, the individual is not necessarily able to remain in such a comfortable place. What might take them out of that society, and what are the personal costs thereof? That was the starting point. The starting point was a sort of complete McMansion; the next step was to destroy the roof, and tear out the drywall, and find out if anything was alive beneath the carpeting and inside the frame of the house.

Yes, I suppose I would like to offer a few words about the other playwrights, and where I feel absurdism comes from.
A popular definition of 'absurd' proposes 'crazy, unreasonable, untimely' as a suitable meaning for the word. The aesthetics of absurdism suggest mystery, confusion, and perhaps 'cutting-edge' theatrics, but the artists associated with absurdism spend an awful lot of its time looking mournfully backwards. Antonin Artaud named his theater after a French playwright of the previous generation (Alfred Jarry), and Artaud harvests his damaged characters from deep in the European past. Samuel Beckett pulls many of his images from the devastated landscapes of the Second World War, and his characters incessantly attempt to remember--remember what? a story? a person? How exactly did they tumble into their current situation? How can they get it right? How can they do it better next time? Whereas Artaud offers visual ecstasy and religious voyeurism, Beckett offers comic circles and tragic cynicism. As a whole, the plays of Caryl Churchill defy any particular emotional landscape, though she also looks backwards towards realism and naturalism. Her play This is a Chair seems to reference the late twenties French painting called La trahison des images. The painting shows us a pipe, but is helpfully labeled, Ceci n'est pas une pipe: "This is not a pipe." And of course the label on the painting is correct; it is not a pipe, but rather a painting. But This is a Chair. Churchill explores the spongy limits of realism, the darkness that surrounds the everyday people that democratic-capitalism panders to. The three writers--Artaud, Beckett, Churchill--find themselves in a crazy, unreasonable, untimely moment. Whatever it is that they were looking for in their youths, it was not quite there, and the experience of its absence granted no secret wisdom that can help the next generation do any better. Comic circles, tragic cynicism. Realism with spongy limits. Visual ecstasy and religious voyeurism.

The techniques and mysteries of these writers trace back to the witches of Macbeth, Shakespeare's soliloquies, and the clipped in media res epics of Homer. But while these writers are decidedly Western in thought and action, one can also look further afield in the wide world and find theatrical art with a kindred spirit; the rhythmic mysteries of Noh drama come to mind, where the key 'event' of the play can involve an act listening, rather than an act of confrontation. There are others as well, but that's enough out of me.
Powered by